Leroy Samuels walked into the Varick Street immigration court in lower Manhattan, his wrists handcuffed and attached to a chain around his waist. “My heart is beating,” Samuels’ older sister Anneisha said from a courtroom bench as her father beside her, his head in his hands to hide tears. Samuels, dressed in an orange jumpsuit, nodded at his family and lowered his eyes.

Three days earlier, the 24-year-old had been in a New Jersey detention center preparing to appear at his first hearing alone. Immigrants facing deportation, like Samuels, aren’t eligible for court-appointed attorneys. And like most immigrants in his position, he couldn’t afford one on his own.

Without legal defense, Samuels was sure he’d be deported to Jamaica, the country where he was born but has not been for nearly 15 years since his father brought him to the U.S.

But he did get legal defense, thanks to a pilot program providing public defenders to detained, indigent immigrants facing deportation at New York City’s Varick Street immigration court. And that program just got expanded to represent all similarly situated New Yorkers facing deportation, in New York and New Jersey courts. I wrote about it for NBC News, with my frequent partner in writing, Seth Freed Wessler. 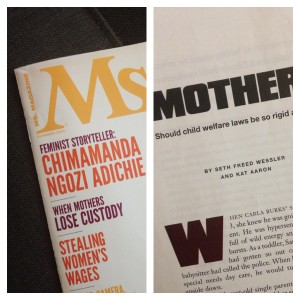 I wrote a piece for the summer issue of Ms. Magazine, about the child removal binary: when a child is taken from a parent’s home, the options are either reunification or termination of parental rights. The piece, with my homie Seth Freed Wessler, explores how we got into this either/or situation and some legal options for flexibility in that rigid system. Thanks to Carla Burks and Karyetta Higgins for sharing their stories with us, and the readers of Ms. It’s not online, unfortunately, but hit up your library or newsstand and check it out.