When Nicolle Bradbury was on the verge of foreclosure in 2009, she reached out to a nonprofit legal services group in Maine, asking for help. Tom Cox, a volunteer with Pine Tree Legal Assistance, took her case. And he quickly spotted a red flag in her file — something that only someone, like Cox, who spent decades looking at legal documents is likely to have caught. Her foreclosure paperwork had been approved by a “limited signing officer,” and Cox suspected that person didn’t know as much about Bradbury’s mortgage as he was supposed to. 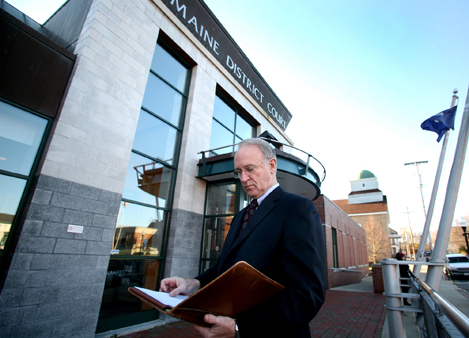 Tom Cox prepares for a court case in front of the Maine District Court in Biddeford on Nov. 18, 2010. He says foreclosure defense work is “some of the most complicated that there is.”

That hunch led to what is now known as the robo-signing scandal: the practice by which lenders and mortgage companies, processing thousands of foreclosure papers every month, used low-level workers who breezed through stacks of documents but did not actually verify the information in the loan papers, although their signatures attested that they had done just that. In theory, borrowers with robo-signed loans may be able to challenge their foreclosures. But flawed loan paperwork is no guarantee of success in court, particularly if, like most homeowners, they are facing the courtroom alone.

“The foreclosure defense work is some of the most complicated that there is,” Cox told me last week. “The amount that you have to know, and the speed at which the law is evolving, is amazing to me.”

To expose what he calls the “dishonest documents,” Cox deposed Jeffrey Stephan, who signed loan papers for GMAC, including Bradbury’s foreclosure paperwork. But to get Stephan “into a chair at a table across from me” took enormous effort, Cox says. He had to file a document with the Maine courts, asking the courts in Pennsylvania, where Stephan lived, to take action. The whole process was so obscure he had to explain the system to the judge.

“There’s no way a lay person could navigate that,” he says. “Most lawyers can’t.”

Maine is not a state known for its foreclosure crisis, and, indeed, the numbers are miniscule compared to states like Nevada and Florida. But in a rural state, where the rental housing options are limited, foreclosure can be devastating.

Nan Heald is the executive director of Pine Tree, the only group in the state that receives money from the Legal Services Corporation. She says that Pine Tree, Maine’s biggest legal services agency, can handle just 6 percent of the foreclosure cases that come its way. And that’s with the support of outside lawyers like Cox. Without the lawyers coming through the state’s pro bono program, Heald says, she’d be able to help just 3 percent of the foreclosure cases they see.

Historically, legal services groups in Maine have received substantial support from a state fund fed by the interest on lawyers trust accounts. But with interest rates down, the flow from that fund has plummeted. Pine Tree is facing a 20 percent budget shortfall this fiscal year, according Heald. Asked how she plans to make up the deficit, she laughs.

“A lot of grant writing,” she says. Heald says she hopes new funding will become available as awareness of the crisis in legal representation grows.

“I’m always optimistic that budget deficits can be erased,” she says. “I’d like to believe that’s possible.”